Writers create screenplays to be viewed. 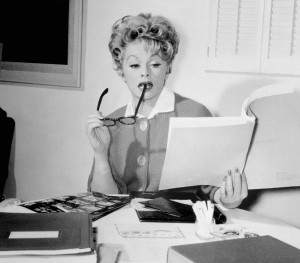 At least theoretically, no movie script was ever written for the purpose of being ‘read’ by an audience.

Actors, producers and directors, of course, read scripts all the time, and they are a key audience for young, up-and-coming screenwriters, but these professionals are also viewers too, right?

They, like general audiences, want to see, view or watch a script, not be forced to read it. We all want it visualized for us, largely, because it’s just easier.

There’s less work involved. It takes time, concentration and energy to read a screenplay, but anyone can collapse on a sofa, turn on a movie and watch it… just kind of skim through it.

So doesn’t it make sense that a script should share that essence and be designed for skimming, and not reading?

Especially since we’re talking about an industry that’s famous for not always reading material cover-to-cover.

When any written document makes for a skimmable read, it rolls off the page. It’s digestible. You see it in your mind and understand it immediately.

Ironically, it’s kind of like watching a movie. Yet a large majority of scripts, even those by working professionals, are constructed in a way that hinders the visual flow of the story, and I’m not just talking about using more active, visually potent language.

Although it’s rarely written about in the best screenwriting books, avoidable words, grammar and even punctuation often obstruct both clarity and dramatic impact, yet screenwriters go back to them time and again because that’s the tradition.

Why create a screenplay using the tools of the novel? Why write a cinematic document, one whose sole purpose is visualization, without a clear design scheme in mind?

Take, for instance, a page from Tony Gilroy’s critical and commercial success, The Bourne Identity. Notice his use of double hyphens in place of extra words. He capitalizes or underlines key words for dramatic emphasis, making them both more graphic and more memorable for the reader. At the same time, while adding all of these elements, he’s still eliminating excess verbiage, everything except the core storytelling words, keeping the page white but not bare.

He avoids big blocks of description and long speeches. And last but not least, he underlines the slug lines to visually approximate the actual cut between scenes. These may seem like small details, but when added up, with a great story, they make for a very fast read.

You’ll be at page 80 without blinking an eye if you decide to read this entire script and I highly recommend it.

Weird metaphor here, but I think any given page of screenplay should look like a children’s rock-climbing wall. The textual elements (i.e. the words and punctuation) are like hand holds, in that they’re generally big, graphic and expertly spaced out in an elegant manner.

There’s variety across the page, between the action descriptions, names, dialogue and scene headings. To follow the comparison through, all of the script’s information comes together so that the eye can easily climb down each page.

Although no design scheme will ever replace a fantastic story well told, a writer should always be thinking about their script’s layout in the effort to layer the dramatic effect and, hopefully, in the process, make their tale all the more readable.