How To Create A Great Script — With Charlsey Adkins 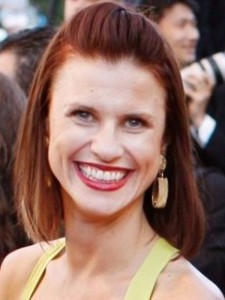 Learn what about a script will make producers sit up and take notice—from the advice of a talented Hollywood executive, Charlsey Adkins!

As part of our ongoing series, which asks our producers about their work in the entertainment industry, I talked with the delightful Charlsey Adkins.

Charlsey is a current Hollywood executive and Voyage producer, and here you can learn some of her insights on what makes scripts unique, fun to read, and interesting to producers—and what writers can do to make their script can stand out from the rest.

With a bachelor’s degree in film and nearly a decade of experience in the industry, Adkins has a serious pedigree in production. Now the Vice President of Development and Production at Harbinger Pictures, Adkins was instrumental in bringing the acclaimed feature film THE HELP to screen.

During her career, she has worked with many writers and learned a lot about what makes a script great and what makes it fall flat. I got to ask her about the kind of scripts that speak to her, and how writers can avoid common pitfalls that turn producers off their work.

So, without further ado, here are…

5 Tips For Writing Your Best Script with Charlsey Adkins

One aspect of a script that turns Adkins off particularly is when it is clear a writer hasn’t proofread their work before sending it off to a potential producer or financier. “I read lots of scripts,” says Adkins, “and I can tell when you care when you’re writing, and when you don’t care.”

That care is most apparent in the level of continuity detail present in the script. Geographical fluidity is one of those details—for example, if you have a character leaving a scene to enter a bathroom, you’d better make sure they exit the same bathroom before they reenter that scene. Usually, this type of confusion is caused by merging two drafts of a scene into one, and can therefore be easily overlooked by a writer. But ignoring those details is a dangerous gamble.

Typos, plot holes, unfinished arcs, and confusing action are all finicky details that plague writers through any draft. It can be easy to think that readers will “get the idea”…though indeed many will, these small details can pile up to take them completely out of the story. Adkins cautions that “Those details are important to have, and they mean a lot to an executive who’s reading your script.”

Truly valuing one’s work, and giving it the greatest chance, means being on the lookout for anything that might serve as a mental speed bump to a reader. Whether that means proofreading yourself or handing your script over to fresh eyes, it’s amazing what errors even a quick read-through before sending a script out to a producer can uncover.

Although the logical and structural aspects of a script are something important to keep in mind, there are more intangible factors that can affect a script’s readability as well—namely, how fun it is to actually read!

Remember, when someone is reading your script, they’ve devoted two or more hours out of their day for this one project. If your script isn’t fun for them, resentment for your script and its story can build up fast. No one wants the reading to take longer than it has to, especially a busy producer who might have to make a split-second decision about whether your script is worth the read or not.

On the other hand, a fun-to-read script will build up crucial goodwill in the reader. Says Adkins,“when something’s a lot of fun to read, I get through it in a second.”

So what makes a script fun? Certainly, numerous errors, overly-long actions, and plot holes can contribute to a script being a drag, and should be weeded out as early as possible. But the writer’s own enthusiasm for their work is the most important for the reader’s enjoyment. If you don’t have passion for at least some aspect of your script, why should a producer care? Any topic that matters to YOU can make an enjoyable script, as long as that enthusiasm is effectively translated to the page.

And don’t just write what you THINK a producer will like. Write something that you find fun as well! Adkins says, “I’m sure there’s producers out there saying […] ‘We need action, we need international, and we need a hot actress role, so write that.’ But for me, it’s really about the story, and the writer knowing their story.”

So don’t sacrifice fun for what you think might sell. You might find that that very mindset is what turns your reader away from what could have been a more engaging script.

Everyone has different passions, and it’s very easy to think that no producer could ever care about a topic as specific as particle physics, small-town politics, or underwater basket-weaving, no matter how personally excited the writer might be about those subjects. And besides, aren’t the biggest blockbuster movies written for the widest audience possible?

While that might be true under some circumstances, Adkins maintains that there’s more to universality than just the writer’s choice of subject matter.

“For me, it’s not the subject matter,” says Adkins. “I could connect to a science teacher and their troubles, or an alien on Mars, if it was written in a way that was fun, easy to comprehend, and moved efficiently. […] It’s about the writing, not WHAT you’re writing.”

Adkins advises writers to try and find those themes in their story that anyone can relate to: love, loss, family, friendship, hardship, and more…but to write those themes from a specific enough viewpoint that keeps the reader interested. “If you can find those universal themes, but write them from a personal standpoint,” says Adkins, “you’ve got a pretty lethal combination.”

Adkins related to me the not-uncommon story of a writer she’d met who worked for ten years as a waiter, writing over a hundred scripts in his spare time—and only considered five of those scripts to be any good. “Make sure it’s the path you want to be on,” says Adkins—because the craft requires a long, difficult road of honing your skills.

If writing is something you love, something you’re good at, and something you believe in, then nothing can stop you from making it your career. But not everyone has that, and that’s okay! Adkins herself admits that she doesn’t consider herself a writer, but her job requires her to talk to writers every single day to help build their stories. If you want to create stories, there are more ways than just writing to feed that creativity.

So, what’s the number one piece of advice Adkins would give to writers starting their careers?

Like the waiter who spent ten years honing his writing craft, you need to put in the hours to get the results you want. Writing is a skill like any other skill: it takes time to perfect. You wouldn’t expect to get rock-hard abs after one workout, or conduct an orchestra after glancing at your first piece of sheet music, so how could you expect to write a perfect script on your first try?

But just because it isn’t good doesn’t mean it’s worthless: quite the opposite, in fact. Any time spent writing, no matter how unproductive it might feel, is bringing you closer and closer to that script that will make a producer enthusiastic about bringing your story to life.

So don’t let your skills fall by the wayside! Get to your notebook, your keyboard, your typewriter—whatever you need to write—and get to work.

Charlsey Adkins is Vice President of Development and Production at the feature film production company, Harbinger Pictures, the company behind the acclaimed motion picture, The Help. Charlsey is responsible for overseeing the company’s development slate and works directly with the head of the company, Brunson Green. Before joining Harbinger, Charlsey gained production experience working on Studio feature films that include We Are Marshall, Role Models, Fast And Furious 4, The Day The Earth Stood Still, and Inception. Charlsey has a bachelor degree in film with a minor in economics. She constantly looks for innovation in content and believes it is the only way to adapt as a filmmaker in this ever-changing market.