What Reality T.V. Can Do For You ANOTHER AVENUE FOR YOUR CREATIVITY IN ENTERTAINMENT 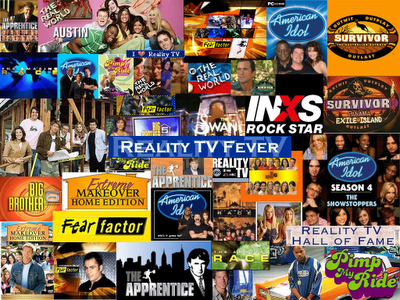 Those days are gone.

These days, reality has grown up, and it’s more popular than ever. Estimates vary, but on average, one third to one half of the time Americans spend in front of the television is spent watching non-scripted programming. More and more networks and media outlets feature reality, and there are more hours of it on each network. There is a reality “industry” and a whole galaxy of reality stars. Where reality used to be the “wild west,” where anything went, now people are having twenty year careers.

Big names like Matt Damon and Ben Affleck have gotten involved, with “Project Greenlight.” Ashton Kutcher did “Punk’d.” Ice-T is on E! with “Ice Loves Coco.” It’s no longer something to be ashamed of. Because of “Survivor” and other shows, you can now even win an Emmy for a reality show. Who would have thunk it? Reality has become respectable.

All this doesn’t mean there aren’t still enormous opportunities out there for the aspiring content-producer. Quite the contrary. Now is the time. The demand for reality content has exploded. All those new programming slots need to be filled. This means that, while you’re working on selling your big movie or scripted series, there may be fantastic intermediary opportunities for you in reality television. This industry moves fast. Pitches are being bought, shows are being produced, careers are being born, and money is being made. And, unlike in scripted t.v., reality has a year-round pitching season. You don’t have to wait for that three month window to put your idea into motion.

Would it be too bold to propose that reality might actually be more interesting, more dynamic, and more lucrative than the traditional t.v. and film genres? That’s for you to decide. But one thing is clear. You can’t afford to ignore reality television any more.

Convinced – or at least intrigued? Then read on for some thoughts and tips from the reality television experts here at Voyage.