Logline, Synopsis, Treatment – What You Need to Know 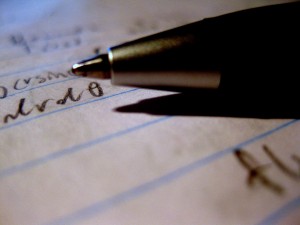 Hook them with a logline

First and foremost, in order to sell a story, you have to know its logline like the back of your hand. Loglines are an industry standard of communication, so being a master of writing a logline is definitely a requirement. So what is a logline, exactly?

A logline is a one sentence compelling and cinematic description of your story, its main character, that characters main objective, and the main obstacle they face.

Your logline is the absolute essence of your story.

Loglines are, by necessity, simple. But they aren’t always easy. While a logline is a simplified encapsulation of the main points of your story, fitting the essence of your story into an easily-digestible sound bite can sometimes be tricky. You have to make several important decisions:

What does the audience absolutely need to know? What else can they infer from the page? What can you make them feel? What makes your story stand out from the rest?

In order to be as effective as possible, your logline needs to do these three key things:

First, it must answer the who? what? where? when? and how? of your story.  This is the bare bones of the story you’re trying to tell. Without this, it can be difficult for a producer to determine what your story is even about, even if the concept may be clear as crystal in your own head.

A good rule of thumb is to include one or two telling adjectives about both your protagonist and antagonist. It might be tough to pin down your complex character to just two words, but it will really help the reader have a clear picture of what kind of character they’ll be rooting for (or against), and why they should even care in the first place!

The next important piece of information you must relate to the reader is what makes your story unique. What does your voice bring the the table? What kind of tone are you trying to set?

This not only establishes the genre you are working in, but also should be used to showcase your own strengths. Let’s say you want to adapt your amazing romance novel. In a market of highly profitable romantic movies, what makes your romance stand out from the countless others? Is it set in a location doomed to destruction, like in Titanic? Do your characters suffer from an illness, like in The Fault In Our Stars? Is one of the leads a sexy vampire, like in Twilight?

Take some time here to consider what a producer might find to market in your story. If they see what’s special about your story, so will your audience.

Lastly, make sure that your logline leaves something to the imagination! It’s bad form to give away the twist ending in a logline. You don’t have space to spoil your twist, and leaving a little mystery should entice the reader to want to read more to find out what happens next.

Sound like a lot to accomplish in just one sentence? Try it out with a property you already know well. For example:

An eleven-year-old orphan believes his luck has turned around when he is summoned to attend a prestigious school for young witches and wizards and develops his own latent magical powers, but soon must fight for his life when he learns that he is destined to defeat the evil wizard who killed his parents.

Even though this is a pretty crude example, we can all fairly easily recognise this as the plot of the wildly successful book and movie series adaptation Harry Potter and the Sorcerer’s Stone. It gives the reader just a taste of the plot and characters, but doesn’t reveal too much to make them uninterested.

Map it out with a summary or synopsis

The next tool in your arsenal of short form materials is your brief summary or synopsis. Longer than a logline but not quite a treatment,your summary is a one- to three-paragraph (but no longer than a page) outline of the plot of your story. This is your opportunity to distill your plot into around one paragraph per act–a useful tool not only for developers, but for you to test out and see if the structure of your movie holds up in its purest form.

For authors, this can also be a useful step to determine if your story works best as a movie or television show in the first place. If you can’t break it down into the classic three-act structure (or five-act structure, in the case of an hour-long television adaptation), there’s a good chance you haven’t chosen the ideal venue for the story you want to tell.
If your story does work here, it’s time to move your story on to the next form….

Elaborate with a treatment

The desirable length of a treatment ranges wildly as you move across the industry, but here at Voyage a treatment is considered to be a 7-10 page story adaptation. Here, you can take 2-3 pages to describe each act, which will seem like a huge creative space to fill if you’ve completed a successful summary. This is really your place to let your creative voice shine through the bare bones of your plot. So, what should you include?

In a treatment, you can start adding in the juicy bits of your story–salient bits of dialogue, arresting visual images, and pieces of important action. You can now include the action of any and all subplots, and describe your characters with a little more nuance.

Think of the treatment as a highlight reel: what are the coolest, most moving, most romantic, most tragic, most horrifying points in your movie? What are those scenes that you just can’t get out of your head? Whatever first comes to mind should be what you prioritize describing in a treatment. If you’re passionate about a plot point, there’s a good chance that someone reading will get passionate about it as well.

If you’ve completed all these steps with your story, there’s only one place to go from here.

Put it all together with a screenplay

You could say that a screenplay isn’t really a “short form” tool–it is, after all, the most complete written version of your story. However, the screenplay is effectively the blueprint of the movie or first episode of the television show, and it includes the entire storyline, the action, and the dialogue in only two hours (or less, in a television adaptation). This is a lot less time and commitment for a reader than reading your entire book, which could easily take 20-30 hours to get all the way though. If you want the most complete version of your story to have the greatest chances of getting read by a producer, you should certainly not discount the screenplay as a powerful tool.